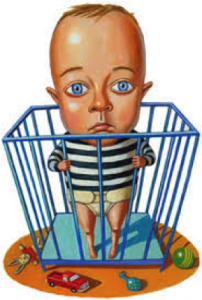 Before You Do, Figure Out if the Problem Is: Your Playpen, Playmates or Play?

Today, I coached a very burnt-out, frustrated client on how he could exit his current position as a software engineer for a large telecom company. After he vented about the bad and ugly of his current situation, we moved on to discuss what was next for him. Finding a job when you have one is always best, since recruiters prefer passive candidates (people who are currently working).

All he could verbalize was that he NEVER wanted to work in Telecom again and he was certainly done with software engineering/development. More venting followed. But after I was able to dig deeper into what he thought he was best at and loved doing, it still sounded a lot like the duties of his current job as a software developer. This was verified by the results from a few career assessments he took. His interests and strengths indicated that he could be very successful in software engineering….ugh.

Now what? Breathing and more digging. As we explored what he was actually doing on a day-to-day basis, we found that, instead of developing new code and programs, he was tasked with maintaining and fixing current programs, all very repetitive, non-challenging work for him. Add a 24-hour beeper strapped to his hip, and he was over it. So the play he was asked to do was not what he was hired to do and not what he wanted to do. Next, we talked about his playmates, specifically his boss. He described him as a micromanager who cared more about managing up than developing his direct reports….ugh. Then we moved on to the playpen, the work environment, location etc. Although he had been promised a flexible schedule with two-day telecommute approved, his hands-on boss required full-time, regular office hours with no negotiation on working from home.

Bottom line: My client came to understand that the play, the work he wanted to do, was the same as his current work, software development, but he needed a company that did not bait and switch the job description, playmates that allowed him a bit more autonomy and a playpen that was more flexible and enjoyable.

So, before you jump ship, take a look at all aspects of your current situation—playmates, playpen and play—before you throw the baby out with the bathwater.